The show will include a stand to answer questions about drones, a space for flight demonstrations and the presentation of the Dronecoria project.

Precision agriculture, and more specifically the application of drones, is becoming one of the most dynamic sectors at the Sant Miquel and Eurofruit trade fairs in Lleida. This year, and with the help of the LleidaDrone association, these devices will have a prominent role through an extensive programme of activities that will include live demonstrations, a consultation service for visitors interested in the subject, introductory sessions for children and the presentation of the innovative Dronecoria project. It should be remembered that the 64th edition of the Sant Miquel Agricultural Fair and the 33rd edition of the Eurofruit show will take place from 27th to 30th September.

During the presentation of the drone activities at the Sant Miquel – Eurofruit Fair, Àngel Ros, Mayor of Lleida and Chairman of the Board of Trustees of the Fira de Lleida Foundation, stressed the importance of this technology in the management of agricultural resources, especially agricultural and forestry resources, and added that Lleida is a world leader in the field of drones, with the LleidaDrone association being particularly noteworthy. Oriol Oró, General Manager of Fira de Lleida, said that the Sant Miquel Fair and Eurofruit are the perfect setting for any technology – such as drones – that contributes to better management of irrigation, fertilizers and phytosanitary products.

Andreu Ibáñez, president of LleidaDrone, an advanced technology association located in the Gardeny Science Park in Lleida, explained that the entity will once again be present for the fourth consecutive year at the Sant Miquel – Eurofruit Fair with a stand in Pavilion 4, where several companies from the sector will be attending to those interested in the world of drones, and with the “Drone Arena” space, 11×16 m, which will allow flight demonstrations. Similarly, on Saturday, 29 September and Sunday, 30 September, children will be offered the opportunity to learn to fly toy drones and participate in a drone race.

Presentation of the Dronecoria project
The Sant Miquel – Eurofruit Fair will also be the framework for the official presentation in Lleida of Dronecoria, a programme by the engineer Lot Amorós, a collaborator of LleidaDrone, aimed at the reforestation of burnt forests by means of a drone that has already obtained great international recognition. The initiative has been presented in 5 countries and has won several international awards.

Dronecoria incorporates the drones bottles with seeds and microorganisms, which are launched in areas devastated by fires, earthquakes or tsunamis. The flying apparatuses have cameras to analyze the best places of action. This alternative increases the possibility of seed germination and access to places where it is not possible to reach on foot.

With a construction cost of 3,000 euros, the drone in question has 6 engines, measures 1.60 meters long and weighs 12 kilos, and has a capacity for 8 kilos of seeds. The device is also sustainable, as it is basically made of wood, avoiding complicated recycling materials.

The project includes the entire reforestation process, from the physical construction of the drone, the incorporation of the software, the preparation of the seeds and their launching in the affected areas. The software with artificial intelligence allows you to drop the seeds on the most suitable areas for them to develop. As for the seeds, the most suitable ones for each soil (grasses, shrubs or trees) are chosen and then palletised, that is, they are incorporated into the same layers of nutrients and natural insect repellent products.

In addition to Spain, the project has been presented in countries such as Argentina, Brazil, Sweden and Chile, where flight tests are already being conducted. In Brazil, the drone has already carried out some pilot tests of reforestation tasks. The initiative has the support of the United Nations, Telefónica, Ikea, Autodesk, Intech 3D and LleidaDrone, among others.

In addition, the TIC Laboratory of the Gardeny Science Park, the Liquid Galaxy LAB, will show the first developments being made in the project’s software, including camera recognition and artificial intelligence of the most suitable burnt areas for afforestation, and the identification of the most suitable routes to launch the seeds, through a system of 5 screens exhibited at the Sant Miquel – Eurofruit Fair. 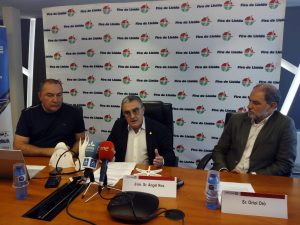 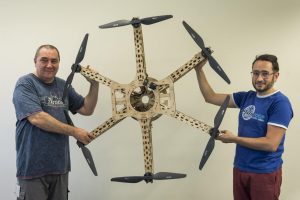